And millions more to come.

Here’s some nice photo’s from Manchester plus a link to a canny story below. 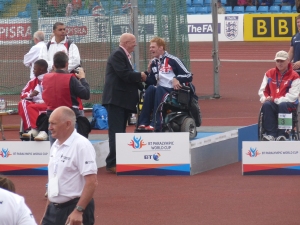 At last I’ve won the bloody Paralympic World Cup at the 4th time of asking, it’s been the only competion I hadn’t won but now I’ve done it and filled a nasty gap in my CV. The PWC has been a bogey competition for me, at my bogey stadium in Manchester – I’m starting to think it’s impossible for to  throw well at the Millenium games warm up track, but I’m nowt if not consistent, and my 31.67 metres yesterday was the furthest I’ve thrown in the PWC, albeit by two centimetres over the distance I threw in 2005.

Lots of positives to take though, as it was the strongest PWC field I’ve had with the top three in the world competing, throwing into the wind was difficult and both Beijing bronze medallist Vanek and world record holder Idoudi struggled. Thomas Green probably threw the best of everyone on the day.

It was a proud moment to win this title finally, especially after loosing the world number 1 spot to Idoudi since Beijjing. It hasn’t been easy preparation for me as I’ve had an infection and been full of cold, and while I wasn’t totally satisfied with how I threw, a win is a win and there’s no better feeling than beating the best in the world,  however far you throw.

I was so happy for my mum, who is only in her second season of coaching me full time, so far she has a 100% record and long may it continue. I wish my dad could’ve been there to see it, but I know he would’ve been looking down loving the result but calling my performance worse than shite.

So I’ll no longer compete as a twenty-something year old, but I won’t feel old and sorry for myself. It’s a new beginning, starting with a new frame and new clubs – I’m excited!

Pain isn’t pain anymore.
It’s just an annoying irritation
compared to the feeling of losing you.

The Paralympic World Cup bomb is ticking with a week to go until the athletics kicks off in Manchester on the 25th May. I’m starting to feel pretty hot again after being under the weather for the past few weeks. It’s going to be a hot competition too with the Paralympic Gold and Bronze medallists from Beijing on the starlist. Of course I complete the set and I’m hoping I can break my Paralympic World Cup record of 31.65m and my stadium record of 32.88m. I’ll be in my old frame as my new frame isn’t quite the finished article yet. In the greater scheme of things it’s not massively important that I do well next Tuesday as it’s January that is the main target, but it’s a competition, and I’m in it, so when I’m in it I want to win it. This will be the first time I’ve ever gone into a club competition as the underdog (so long as Mourad comes over) so it will be nice to have a little less pressure, and maybe I’ll be able to enjoy the PWC this year, as it’s been a struggle in the past. The PWC is difficult to prepare for with being so early in the season but if I’m honest it is about time I threw well at it having thrown crap the previous 3 times, I’m due a good throw and it’s time to make it happen.

Special shout out to Paul Collingwood for leading England to the Twenty20 World Cup – He’s a canny lad for a Makem.

I've been competing in international athletics for over 20 years. Taking part in 6 Paralympic Games and winning 6 medals including 3 golds, a silver and 2 bronze.

I do a fair bit of public speaking and appearances, feel free to contact me if you think I could be of use.

I've wrote a book titled 'Paralympian', which you can check out here

On this blog there'll be a mish-mash of my general ramblings and bad poetry, feel free to leave comments and stuff.

Subscribe to A Clubber's Guide to Life by Email

A Clubber’s Guide to Life